An acknowledgement, but not really a correction

A few days ago I wrote a post (what matters is the radiative imbalance) in which I claimed that a post by David Stockwell was wrong. David made a few comments on my post, claiming that I had made a mistake. The exchange didn’t end particularly well, but – in the interests of honesty – I’m going to acknowledge something. To be clear though, what David concludes in his post is still incorrect, but I did misunderstand something that he was saying.

In David’s post he refers to a continuous top-of-the-atmosphere forcing of 1 Wm-2 and suggests that this is consistent with IPCC estimates. The only IPCC estimate he mentions in his post is the change in radiative forcing since 1750 (the change for the last 50 years – the period considered by David – is just slightly more than 1 Wm-2). Hence, I assumed that he had confused the TOA imbalance with the change in forcing. It seems that this may not be correct and that he did indeed mean a TOA imbalance. Admittedly, he did make it difficult to realise this, partly because he refers to a paper by Meehl & Hansen (which I cannot find) and partly because he calls it a continuous TOA forcing, which doesn’t really make sense (i.e., it’s not expected to be constant).

So, what David appears to be actually referring to is the TOA imbalance suggested by climate models. This is illustrated in the figure below, taken from Hansen et al. (2011), which shows how the expected TOA imbalance changes with time and with response function. Most climate models assume a slow response function and hence predict that, since about 2000, the TOA imbalance should have been about 1 Wm-2. What David is claiming is that his analysis of the ocean heat content data suggests it is actually 0.27 Wm-2, much smaller than that predicted by climate models. He concludes that this implies a lower climate sensitivity than climate models would predict. However, what David has done is compute the average for the last 50 years, and compared it to what would be expected for the last decade or so. It’s clear, from the figure below, that the TOA imbalance is expected to have been increasing with time, and hence the average for the last 50 years would be expected to be quite a bit lower than the current value. 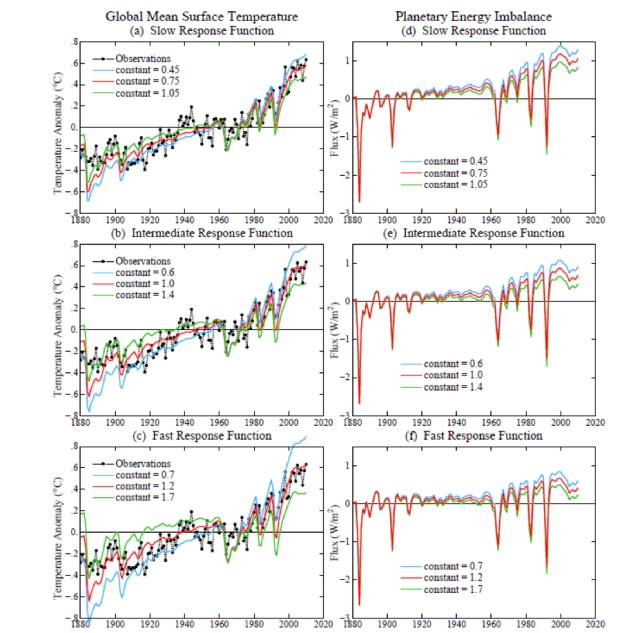 So, yes I may well have misunderstood (justifiably so, I would argue) what David was referring to in his post. No, it doesn’t mean that what David was suggesting (climate sensitivity is much lower than expected) is correct. However, as part of this exchange I did come across the paper by Hansen et al. (2011) which appears to be an excellent analysis of our current understanding of climate science and climate modelling. It is rather long, so I haven’t read it all, but what I have read seems excellent and I certainly recommend it as a very good resource.

David, however, doesn’t think particularly highly of the Hansen et al. (2011) paper (Honest Jim: The science is not settled). This has already been rebutted by Geoff Davies but I thought I would make one comment, related to the figure above. In his criticism, David Stockwell highlights the following paragraphs from Hansen et al. (2011)

If the negative aerosol forcing is understated by as much as 0.7 W/m2, it means that aerosols have been counteracting half or more of the GHG forcing.In that event, humanity has made itself a Faustian bargain more dangerous than commonly supposed.

David, interprets this as an indication of a problem with the GCMs. In a sense this is true, but this is discussed in quite some detail in Hansen 2011. The basic issue seems to be that the rate of heat uptake in the deep ocean is higher in the models than is observed. Yet, these models seem to still be doing a reasonably good job of matching the rise in global surface temperatures. Most of these models, however, assume a slow response function. This means, if I understand it correctly, that the system responds slowly to changes in forcings and means, essentially, that a large amount of energy needs to go into the oceans so as to reach equilibrium.

If this is wrong, then how can the models still be matching the observed rise in surface temperatures? A possibility, according to Hansen et al. (2011), is that they’re ignoring the effect of aerosols. Aerosols have a negative forcing, and hence the overall forcing in the models is higher than it is in reality. This compensates for the slow response function, allowing the models to match the surface warming. What Hansen et al. (2011) suspect is that the actual response function should be faster (i.e., the system responds more quickly and less energy goes into the oceans – as suggested by observations) but the overall forcing is lower due to the influence of aerosols. This, however, shouldn’t be seen as a good thing because the aerosols tend to be short-lived and hence their influence on the overall forcing (reducing it) could change and therefore – if this were to happen – the overall forcing could increase.

So, maybe one could argue that the climate models are not quite correctly representing the climate system. However, this appears to be (at least if I understand Hansen et al 2011 correctly) because they’re underestimating the influence of aerosols. This suggests that the response function is faster than some models have been assuming and hence that the climate can respond faster to changes in forcing. Accurate estimates of the TOA imbalance could constrain this uncertainty and, as pointed out by Hansen et al. (2011)

If Argo data are complemented with adequate measurements of climate forcings, we will argue, it will be possible to assess the status of the global climate system, the magnitude of global warming in the pipeline, and the change of climate forcing that is required to stabilize climate.

So, I’ll end this rather long post there. The main point of this was to at least acknowledge that I may have misunderstood something about David Stockwell’s post, that I referred to earlier, and to highlight the Hansen et al. (2011) paper that appears to be a very thorough summary of our understanding of the climate system.

17 Responses to An acknowledgement, but not really a correction

...and Then There's Physics

The Only Losing Move is Not to Play

A BLOG BY G.P. WAYNE

Reflections on the refractory problems of climate and energy

Straightforwardly explaining climate change, so you can read, react and then get on with your life.

Stoat
From a Glaciers Perspective

Glacier Change in a world of Climate Change

Once you have finished counting diatoms, the real fun begins

Climate Denial Crock of the Week

Dispatches from the climate change debate

Wott's Up With That?

A response to Climate Change disinformation at wattsupwiththat.com